The days of the Caves: echoes of war caught in Cisterna rocks.

As in every unresolved analysis, in Cisterna di Latina there are those who charge of the events the Americans, who did not dare to proceed qickly toward Rome after the landing at Anzio, and those who charge the Germans, retiring savagely as wounded wild beasts, with the vicious fury of the last moments. In the uncertainty of the last days of January 1944, waiting for the final showdown, with the known result, but that could have ended much earlier, the population of Cisterna wakes up with the illusion that the landing really means the end of the second world war. In a few hours it becomes clear that it is not so: after years of war, the population is on the point of suffering the further terrible trial of seeing the town transformed in a battle field. A battle field on which will take place some decisive facts of a war that has already upset the whole world.

Bullettin of the High Command of the Armed Forces.

“In the first hours of January 22 Anglo-american troops landed at both sides of Nettuno, on the Thyrrenian sea coast…”.

January 22, 1944. Hundreds of planes fly over Cisterna, deafening rumble of motors, machine guns and bombs. As inspired by an atavic call, people go underground, in the attempt of being harbored in a protective womb. The inhabitants of Cisterna are not yet aware of it, but they are beginning a “life in the caves”, in the countless underground ambients of the town (cellars, burrows, tunnels) named after the owners of the buildings above: Caetani Caves, Luiselli Cave, Corsi Cave, Paliani Cave, Zampini Cave, Carolina Cave.

The days of the caves last from January 22 to March 19, 1944. The greatest tragedy of Cisterna, that along the millennia had already suffered so many assaults and destructions, is told by Father Eugenio Calderazzo, in the book “North of the sky of Anzio and Nettuno”.  The capuchin friar was in Cisterna to visit his family and will stay in the caves together with the population for almost fifty days. His story describes the events vividly as in a movie that nobody would ever have desired to see, but that today gives precious and fundamental elements to reconstruct the history of the cave days.

January 23, 1944. “Somebody has hanged the image of a sweet Madonna with child on the tufa wall, between two bunches of evergreen. Nearby an oil lamp. As background, the children crying.”

January 25, 1944. “The Caetani shelter suffers the baptism of blood: a father dies and two boys are wounded; they have gone outside to draw water.” 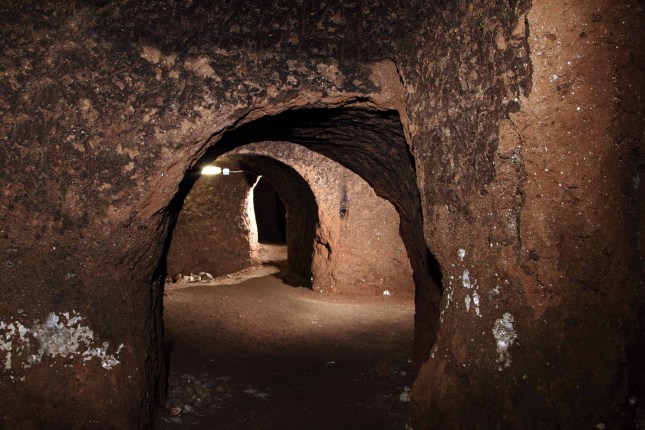 January 26, 1944. “People flee from Luiselli Cave looking for shelter in safer caves. I go down to bless the victims that lie buried and find heartbreaking scenes.”

January 29, 1944. “Dreadful rumbles as if the end of the world is coming give to the whole underground community the appearance of a terrifying bedlam. Desperate screams, cries and faintings. Also the light goes out and the cave becomes dark, as a tomb on the point of closing on so much life.”

February 2, 1944. “In all the caves the struggle for life goes on: lives that succumb and lives that germinate. Five baptisms, few white ribbons appear as flowers in the caves.”

The 48 days in the caves end on March 19, 1944. For nothing the inhabitants of Cisterna have stayed underground with the hope that the battle would move elesewhere, or would cease. They come out of the caves on the day of Saint Joseph. They have pale and haggard faces, and hollow eyes. They have suffered mournings, deprivations, cold, darkness and the difficulty of living in thousands in narrow spaces. For nothing the sacrifices to remain close to one’s own house and land. On the ouside, they find a town completely destroyed and the order to leave, to evacuate within 24 hours. Now the Germans want also the caves…

From April to December 2011 our association, pertaining to the National Commission Artificial Caves SSI (the study group composed by the major Italian experts in the field of artificial caves), has “lived” long in the Caetani Caves in Cisterna, thanks to an agreement between the Municipality and the Italian Speleological Society. The accurate documentation of the hypogea includes a topographic survey, a geologic analysis, CAD topographic report, air analysis, photographic report, the guidelines for a route suitable also for not-speleologists (route that will be very likely added to the present one), and the production of some didactic panels, which summerize the accomplished work.  Also in this case we have dealt with our work with the aim to restore, as far as possible, a “memory to the place”. An opportunity reserved to whom, having been involved in speleologic activity in artificial cavities for many years, faces his task going back in time, in order to give an answer to the basic questions. Who has carried out the work? Why? When? How? By disclosing the technical devices used in the construction and the different usages over time.

From our study have also arisen interesting hints for continuing the investigations, to be performed in 2012; our main aim will be the study of the ancient hydraulics and the attempt to understand how, in a region so rich in water, there has been – over the centuries – the necessity of so many water reservoirs (cisterns). A more complete report have had published in Proceedins of VIII Convegno Nazionale di Speleologia in Cavità Artificiali (Ragusa, september 2012).

3 risposte a “The days of the Caves: echoes of war caught in Cisterna rocks.”